We are going to use this space to document our interactions with other members of our community. We know that we have a significant reach in our community, but we often don’t document the many ways in which we do so. In order to apply for grants we need to have this information at our finger tips.

18 January: Repair Cafe 48 people had repairs done, around 15 repairers attended and more came for the coffee and cake.

21st January: Andrew Backhouse organised a public meeting at St Chad’s in Handforth  to see what the Handforth community might do about the climate emergency. 45 people came, all concerned that we need to be doing something. People talked about the importance of bus use, walking to school, setting up a Handforth bag, cutting plastic, allotments/growing own vegetables, tree planting, and becoming bee friendly. A Handforth woodland group has been set up as well, trying to get trees planted around Handforth. 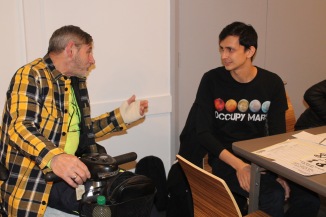 East Cheshire Climate Alliance
Transition Wilmslow is working with other local climate action groups, in Bollington, Macclesfield and Congleton currently, to lobby the council and share good practice. We are meeting about every 2 months with the next meeting on the 2nd April in Wilmslow.

2 February: TW has written to our MP, Esther McVey, about the importance of conserving peat as a major carbon store (not just Lindow Moss) and pushing for a ban on peat based composts that lead to the extraction of peat. peat letter

6 February: meeting organised by Climate Conscious Wilmslow on diet and climate change, given by Prof Sarah Bridle. Around 60 people attended. Details on http://www.transitionwilmslow.co.uk/food

14 February: Distributed heart shaped biscuits and “Love Hearts” with XR Wilmslow to people arriving at Handforth and Wilmslow stations between 7.30 and 9am  to thank passengers  for travelling by train and not by car. Interesting conversations!

29 February: Joined with Plastic Free Wilmslow and talked to around 100 shoppers at Wilmslow Waitrose in the SAS Mass Plastic Unwrap.

Volunteer alert! We would love to help more schools plant trees. Trees provide shade, mitigate against climate change, provide a home for so much wildlife and are just so lovely to look at… and good for our mental health too. We can provide the trees (for free!), expertise & advice, and help with planting. We need help liaising with schools so we can help them have the trees we know they’d love! Email transitionwilmslow@gmail.com thank you! @ljnatural
Very excited to have packed up the prizes for the @festivalofnature art competition! Looking forward to presenting them tomorrow with @ljnatural and Brian Donohue from #wilmslow NP group @ Wilmslow Library!
Great to have #Bez here today telling us about his #greener life making beer and cider, eating green and trying to reduce our #carbonfootprint #climateemergency
Come down to bank square #wilmslow and see how you can do your bit for the planet and have fun! #onyerbike #bez #climateemergency
Just getting set up for @festivalofnature thank you to all our sponsors! Come on down!
Thank you to @Cllr Suzie A-S, @Cllr Craig Browne & Cllr David Jefferay for showing 2 wheels (esp e-powered) are more fun than 4! Book your test ride on www.festival of nature.co.uk and get that e-bike smile… !
Loading Comments...