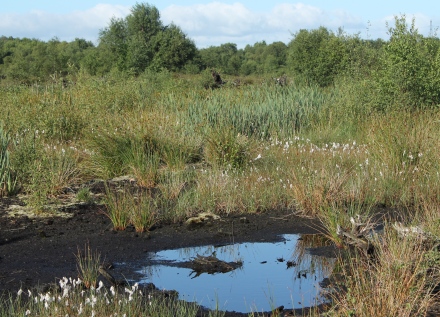 6. Variety of plants near a small bog pool: In areas where peat cutting has been relaxed, mire vegetation including the characteristic cotton grass is able to re-establish and the bog begins again to capture carbon dioxide from the atmosphere. 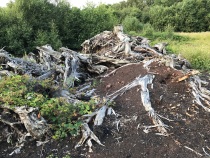 5. Fossilized pine roots: From around 6,000 years ago pine trees were able to colonise the surface of the mire and the pine woodland persisted for 2,000 years until wetter conditions prevented pine regeneration. The pine trunks and roots were preserved beneath a blanket of Sphagnum moss. Today the magnificent ancient pine stumps are trashed and discarded by the peat operator. 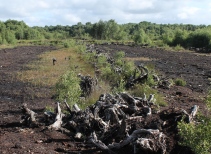 2. Part of the Moss stripped of surface vegetation and some of the peat: Fossilized pine tree roots (see 5 below) have been excavated from the peat and left in rough piles. There is still more depth of peat to be excavated here. 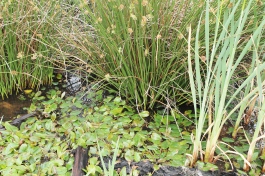 4. Small bog pool: Lindow Moss started as a post glacial lake which became choked with vegetation. Patches of bog pondweed, soft rush and reed mace can still be found on the moss, supporting a small population of water voles.

3. Drainage channel: Today deep drainage channels criss-cross the bog and extract the water from the peat, causing it to shrink and oxidise so releasing carbon dioxide back to the atmosphere. 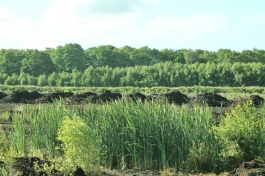 1. Piles of extracted peat waiting to be removed: Lindow Moss was once the most extensive lowland peat bog in Cheshire covering 600 hectares (1500 acres). At its heart the bog is still cut for peat on an industrial scale. Two thousand years ago people revered this place and marked it with the ritual sacrifice of Lindow Man whose preserved body was discovered in 1985. The site where the bog body was found, although internationally renowned, is not marked in any way. 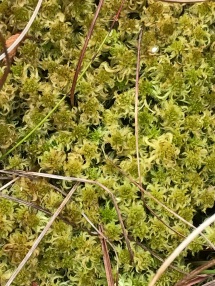 8. Sphagnum Moss: Lindow Moss was ‘built’ of sphagnum moss over thousands of years and it can still be found in the wet areas. If the drainage channels were blocked and the peat surface was re-wetted then sphagnum would re-establish, so accelerating carbon capture from the atmosphere. 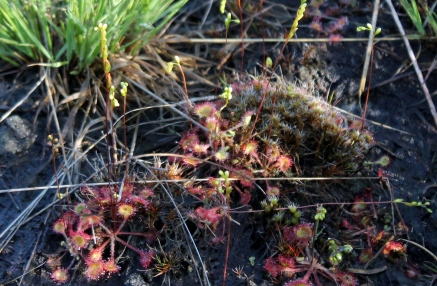 9. Sundew: in July the delightful, insect catching plant sundew is found flowering on the bare peat. The insect trapping ‘dew-drops’ persist even in hot weather and herbalists believed the plant to have special powers as an elixir of youth!

Well, we do obviously, because we know how vital peat is as a carbon sequester, we know that damaged peat bogs are extruding CO2, and we want to see our beloved Lindow Moss restored so it can become the beautiful landscape it should be, supporting biodiversity and acting as a much needed carbon sink. It is good to know that we are not the only ones, and that most commentators (not all) are on side with us. The recent CCC report on Land Use specifically targets peat bogs as a vital component in the battle against climate change and demands specific action including the banning of peat sales by 2023, the banning of peat burning  and restoration of bogs including rewetting. Zac (now Lord) Goldsmith, Secretary of State for the Environment is reported to have said in a radio interview that if we are worried, we should stop buying peat and lobby DEFRA. Well, yes…we hope everyone who loves Lindow Moss does not buy peat based composts. We are not quite sure how to lobby DEFRA but we have written to our MP, Esther McVey, to ask her to support the immediate ban on peat sales and to lobby for immediate peat bog restoration, and we have copied the letter to DEFRA.

Our letter is here

Letter to MP re Peat Sales

Feel free to write in support as well. Save Our Peat Bogs!

#wilmslow Physic garden coming on a treat in April sunshine! Lots of plants traditionally associated with healing; appropriately situated by @wilmslowhealth ! Just waiting for some lovely orange calendula to get a bit bigger and stronger and we’ll add those in @wilmslowforestgarden @wilmslowcommunitymarketgarden @wilmslowinbloom #wilmslowgrows
Valerian officialanis in the #Physicgarden on Chapel Lane... hoping it thrives and we get some lovely pink and white flowers. Thanks to Blackbrook Herbs in Nursery Lane for the advice! #wilmslowgrows #Lovethelane #wilmslow
Another addition to the #wilmslow #physicgarden feverfew thanks to Blackbrook herb nursery in Nursery Lane #lovethelane #wilmslowgrows #wilmslowcommunitygardens
Lots of trees coming down in #wilmslow but we want to plant lots more! Do you know of anyone with land that they might donate/lend for a community woodland? Let us know!
Fed up with trees just disappearing? Want to see more trees not less? We want to plant LOTS of trees but need land to plant them. Do you know anyone who has land where we might plant trees? Please let us know! Details on www.transitionwilmslow.co.uk
So sad to see trees coming down around the peat farm site. We knew some trees might be felled but really? What will the impact be on birds and bats? All in line with planning permission it seems 😢